There are plenty of good pizza places here in Logan, Utah, but most of the time I prefer to make my own. Normally when I make pizza – it’s for a crowd – and with a recipe that requires that I start the dough at least 24 hrs in advance. But, sometimes I want to be selfish and make pizza just for me. I wanted a recipe that didn’t require a mixer, any kneading, or a rolling pin. I wanted it to be fast, taking less than an hour to get into my belly. Most importantly I wanted a crust so crisp they’d call me captain crunch.

To achieve this I started with a really wet dough. It’s easy to mix by hand so you can build up the gluten in bowl (meaning no flour needs to dust my countertops). After it’s mixed I can just dump it into a greased cast iron pan where all that extra moisture will help it rise quickly. Salt slows gluten formation as well as C02 production from yeast. I’m not gonna lie that it might just be superstition at this point but I swear I get a crispier crust if I sprinkle the salt on top of the dough before the rise. If you’re against that you can totally just mix it in, but I’d wait until the very end of the mixing process. The catch with the recipe is you have to bake the crust before you top it. The uncooked dough is so tender it’s not a great idea to add sauce and cheese until after it’s spent its time in the oven.

Most people only stock their pantry with all-purpose flour. We use it for everything cakes, cookies, and bread. That’s what people have so that’s what bakers build recipes around. But it’s not the only flour in town and sometimes another sack of ground wheat can do a better job. This brings me to bread flour. Bread flour has a higher protein content, which helps build a crispier crust, and it gives the bread a stronger chew. So if you have to go to the store to pick up pepperonis and cheese, I’d also grab a bag of bread flour. It’s worth it. If you’re morally opposed to trying out a new bagged white powder, all-purpose flour will work fine. You’ll need a little more flour, and you’ll end up with a crust that’s just a bit fluffier and a little less crisp.

Back to that cast iron pan! there’s lots of recipes for cast iron pan pizza out there, and for good reason. It’s the easiest way to get a crispy crust (especially when I’m not feeling like wrestling my 25lb pizza stone out of my oven drawer). A well-seasoned cast iron pan lets us crisp the crust on the stovetop before throwing it in the oven to bake through. 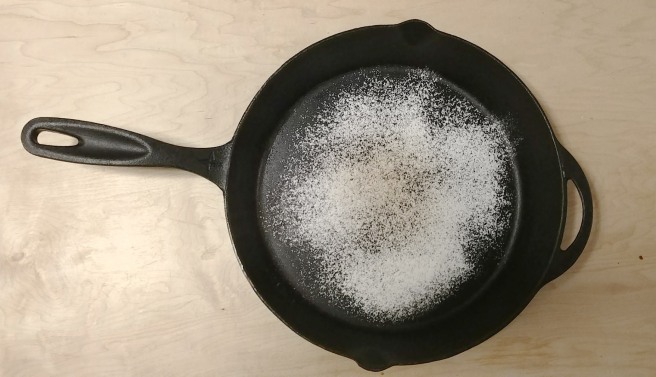 Starting the crust out on the stovetop is essential if we want a nice crisp crust. But because it’s such a loose dough there’s really no peeking to see when a nice brown crust is achieved. So I rely on timing. On my electric stove using my ‘Lodge’ cast iron pan it takes two minutes and thirty seconds for the crust to brown. It takes the same amount of time for my mom’s pan set atop her gas range. If I’m using my friend’s deluxe pan made by Barebones living, I have to add an extra minute. The point is that this timing could be wildly different for you, but there’s a simple test to figure it out.

Take your empty cast iron pan and set it on your desired unheated burner. Sprinkle a fine layer of flour over the pan, then with a stopwatch in one hand start the timer and turn the burner up to max. A soon as that flour starts brown just a bit in the center (like in the photo above) stop your timer and kill your heat. (Just make sure you give your pan time to cool or run the back of it under cold water before you fill it with dough.) The amount of time it took your flour to brown is how long you will want to cook your crust in the pan on the stove.

• It may be tempting to bake the crust first and then crisp it up on the stove top. I tested this method and it did work but it was significantly less crisp.

•If you are trying to impress someone with a hell of a grilled cheese I’d make this recipe top it with cheese, chop it in half and sandwich the peices together. Dipped in some tomatoes soup it would be amazing.

• I’m not a big fan of saucy pizza. So when I use sun-dried tomato pesto instead of traditional pizza sauce. It full of flavor and prevents my cheese from falling off my crusts.